I was extremely happy with MovableType - that is until I decided to upgrade to the latest version 3.33. Though the upgrade process finished without any errors, the system started behaving weirdly - the UI had lots of glitches. That is when I noticed that even after the upgrade the system was still reporting the previous version. I had wrote about it here.

There was no news from SixApart for almost a month! And today I saw a new blog on their site saying that they have (actually) released version 3.33 now. They announced that..

Today we are releasing required updates for both Movable Type and Movable Type Enterprise to fix a number of vulnerabilities affecting all previous versions of the platform. The current status of our security update process:

If you are running a version of Movable Type older than 3.2, it is especially imperative that you to migrate immediately to version 3.33 due to the importance of fixes for the current issues as well as several significant security enhancements which have been made since your version was released.

Release mishaps do happen and I was only happy to see an 'new' release and eagerly started the upgrade process (again). To my surprise the UI glitches are still not fixed.

If you thought the glitches could be trivial, well I let you to decide for yourself... 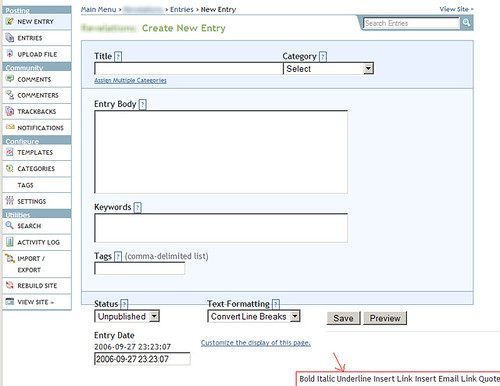 The glitch is there in 'create new blog entry ' screen itself - Which should be the most important screen in a blogging tool. The formatting toolbar is at the bottom of the screen as a set of stray text links!
I hope SixApart is listening!!!

Correction:
This is my mistake. I had not uploaded all the new static files (.JS, images and .CSS files) into the right place on my server. My static folder was configured to be outside my MT directory and I totally missed this!